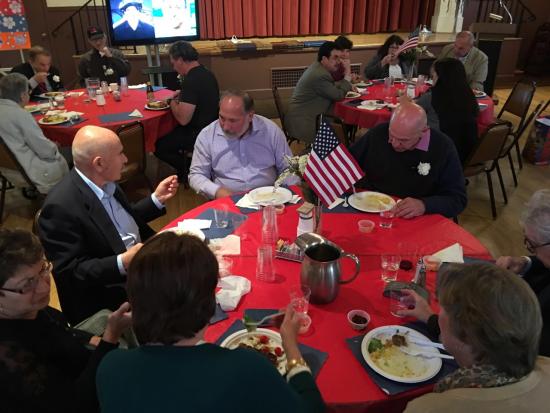 On Friday April 28, St. John held another family night dinner to honor this community's long record of service by our veterans, peace officers, firefighters, and other first responders. Proceeds from the dinner are still coming in, and are expected to exceed $ 1,000.00, which is to be used for the chaplaincy program that assists current and former soldiers and their families in Artsakh, led by Dn. Volodya Najaryan.

Our guests enjoyed a wonderful dinner prepared by Royal Market with an added special taste of real Texas Armenian chili prepared by Paula Boghossian and her mother Helen Manougian in honor of our very beloved Paul Manougian. Paul's parents Gevan and Iskouhi owned a famous restaurant in San Francisco that served Armenian-Texan Chili to thousands, including at least one US President from Texas, Lyndon Johnson, who asked Gevan what part of Texas Armenia was in. Paul was a United States Marine in WWII and he survived the Battle of Midway, one of the most famous naval battles in world history.

We also remembered our beloved Zaven Jardarian, who served his nation first as a navigator on 35 missions over Europe in a B-17, and then served his nation all over again as a Special Agent for the Federal Bureau of Investigation.