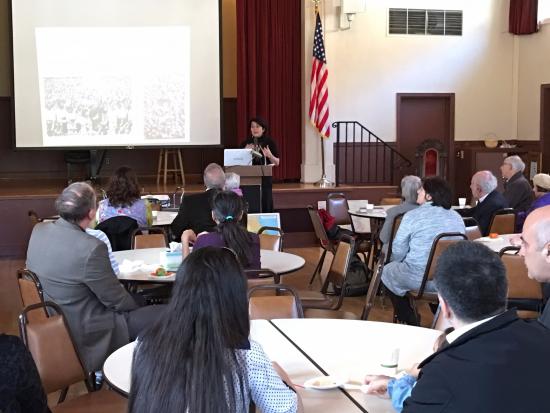 Sunday, March 5, following the Divine Liturgy, the parishioners gathered in the courtyard near the monument of the Armenian victims of the Sumgait massacres of 1988 to participate in a requiem service and pay respect to dearly departed. Fr. Mesrop Ash conducted a Hokihankist along with altar servers and choir members. Upon conclusion of the service, he invited the faithful to place flowers and gather at Paul Family Hall for a special program.

After a short break, Fr. Mesrop welcomed everyone and expressed his sympathy and condolences to the Baku community for the loss of their loved ones.  After a brief introduction, he invited the guest speaker Nona Shahnazarian to the podium.

Ms. Shahnazarian who is a visiting scholar at the Center for Russian, East European and Eurasian Studies at Stanford University through the Carnegie Visiting Scholars Program, spoke about the investigation into the Azeri pogroms of the Armenians in Sumgait. She presented how the Ethnic Armenians who were settlers from Karabakh contributed to the construction of Sumgayit, a city with 20,000 Armenians, who lived their entire lives peacefully in the region. But tragedy s again to the Armenian Nation and in 1988 and Baku Armenians became a refugee in a matter of few days due to the atrocities were done by Azeris.  Hundreds of Armenians were killed, women and underage girls were raped, and thousands of citizens who lived peacefully became refugees in a matter of a few days. She mentioned crucial facts about how the Armenian Genocide of 1915 was similar to the 1988 Sumgait pogroms.

Ms. Shahnazarian believes that the pogroms of the Armenians in Sumgait during the declining Soviet period needs further academic research even thought it was selectively investigated. She also mentioned an important fact that the USSR and Soviet news agency TASS referred to these atrocities as “killing by hooliganism,” yet the Soviet officials failed to prevent the violence which can be identified as a major failure. The presentation ended with Q&A.

Fr. Mesrop thanked Ms. Shahnazarian for her intellectual presentation and wished her success in her future research.