A Novel of Love in a Time of Fear 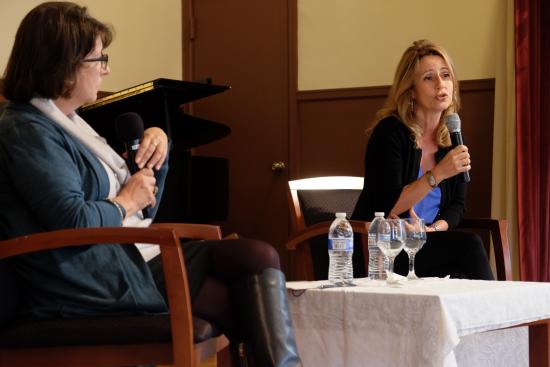 On Sunday November 8, 2015 St. John wholeheartedly welcomed author Maral Boyadjian to discuss her acclaimed book “As the Poppies Bloomed” with her sister Salpi Ghazarian, Director of the Institute of Armenian Studies at USC. During the conversation with her sister and the audience, Maral shared some of her familial stories from her grandparents, all four of who were survivors of the Armenian Genocide. She explained the impetus for writing her book was to present and introduce the topic of the Armenian Genocide to a wider audience and to a new generation, namely that of her young daughter’s. She discussed how her five year journey to completing her book, in time for the centennial of the Armenian Genocide, included a trip to historic Armenia to help her write a more authentic depiction of intangible details in her novel. As a self published author, her debut novel has gained critical acclaim and rave reviews from established book reviews including the Huffington Post, Kirkus Reviews, Forward Reviews among others.

As the Poppies Bloomed is a beautiful love story of Anno and Daron woven together with historical facts, cultural traditions, sensory details of the land and memories of her four grandparents, all survivors of the Armenian Genocide. When asked what the audience can do to encourage greater dialogue and awareness of the Armenian Genocide, Maral encouraged everyone to purchase Genocide related books, not just hers but other books as well, and to donate them to libraries everywhere. The greater visibility of such books by booksellers and librarians will create greater awareness and opportunities for dialogue. As the Poppies Bloomed available on Amazon, at the St. John Holiday Boutique, or ask for it at your favorite bookstore.

“The fact that Boyadjian, some four generations later, was able to write such a stirring novel from the safety of her Southern California home, provides some indication of the fierce will that the characters in her novel displayed when confronted with the most difficult of conditions. Poppies is a story of love, loss and in the end salvation–the best type of story we have to remind ourselves of some of the worst, and best, aspects of the human condition.” - Huffington Post

“With her debut novel As the Poppies Bloomed, Maral Boyadjian tells the story of an Armenian family living in the waning years of the Ottoman Empire. Though the story initially focuses on a budding romance, the threat of war and genocide always hovers over the proceedings. Boyadjian weaves those elements together well, striking the right balance between the family conflicts and the larger geopolitical ones, producing an effective work of fiction with real history behind it.” - Forward Reviews