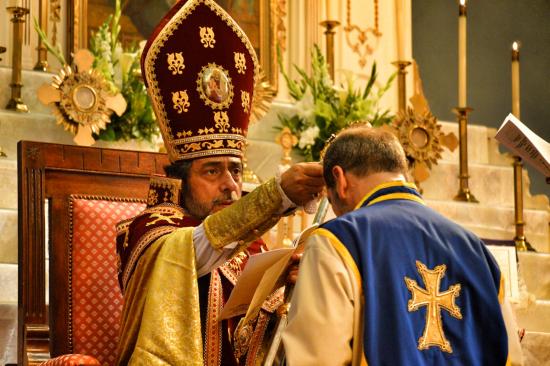 Sunday, March 30, was truly a day filled with the grace of the Holy Spirit for St. John parishioners. It was a special day of many activities incluiding the Episcopal Divine Liturgy, ordination of Deron Kapeghian to the deaconate, Hokehankist requiem service for Sumgayit massacres, our Michink luncheon, and the workshop organized by the Christian Education Council with Northern California Sunday School Students and parents.

The church bells rang at 10:25am inviting everyone to worship. His Eminence Abp. Hovnan Derderian, Fr. Mesrop Ash and our dedicated altar servers proceeded to the altar, while the choir sang the beautiful hymn Hrashapar.

The ordination of Deron Kapeghian took place during the Divine Liturgy. Hovnan Supazan congratulated Deacon Daron and the entire St. John parish. Supazan also delivered a very moving spiritual message, where he talked about the violence that has occurred in Syria especially in a village of Kessab, and urged the parishioners to unite and pray for the safety of our brothers and sisters in Syria.

Fr. Mesrop then invited to contribute generously to the Relief Fund established by the Armenian Church through the Western Diocese in order to offer real and necessary support to those left homeless and in need. Over $1,000 was collected from the parishoners during the Divine Liturgy.

Upon the conclusion of the Divine Liturgy, Fr. Mesrop invited the parishioners to the courtyard to participate in Requiem prayers for the victims of the Sumgayit massacres and to place flowers in front of the memorial.  The church services were followed by a Michink Luncheon. More than 130 people attended the luncheon, which was prepared by our hard working ladies. Our ACYO, and Sunday School students served the food to the guests with their beautiful smiles and great attitude.

Following the opening prayer offered by Fr. Mesrop, Mr. John Dahlberg who emceed the event welcomed and thanked everyone and invited Dn. Steven Cherezian, Parish Council Chairman for remarks on behalf of Parish Council. Dn. Steven thanked Hovnan Surpazan for coming to San Francisco, congratulated newly ordained Dn. Deron Kapeghian and thanked everyone for supporting St. John. He then announced that a total of $6,000 will be donated to Syrian-Armenian Relief Fund, $1,000 from the plate collection and $5,000 from the Parish's funds as allocated by the Parish Council. Those in attendance were proud to be able to offer this level of support for a necessary cause.

During the lunch, the Primate engaged the youth of St. John, inviting them to answer various questions about their relationship with God and the Church. This kind and even humorous interaction was an inspiration for all to value the presence of the youth in the Church.

Debbie Derderian the chairlady of the Christian Education Council gave a brief report about the importance of the CEC for Sunday School teachers and students, and the necessity of catechises in the Church.

The program continued with the screening of an excerpt from “Ordinary Genocide” documentary film by Marina Grigoryan, which showed the suffering of the Armenians of Azerbaijan and Nagorno Karabakh. Then Fr. Mesrop Ash acknowledged and appreciated all the volunteers who worked diligently to make this event possible. He congratulated and welcomed Dn. Daron and his family, and invited Abp. Derderian for final remarks and benediction.

In his remarks he acknowledged and thanked all the Ladies Society for their fantastic support, as well as the members of the Choir and the Altar Servers. He deeply thanked the Parish Council for their financial support toward the relief effort in Syria. The Event concluded with benediction and Lord’s Prayer. 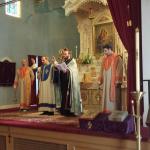 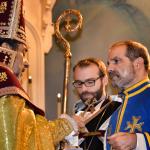