The evening began with clergy conducting the Lenten Vigil Service of the Armenian Church, which was a moving and spiritually cultivating experience for all who joined in prayer. Later the group gathered in the parish hall to enjoy their common meal, and discuss the groups recent activities, including a demonstration, which was held in Downtown San Francisco to raise awareness about the plight of Christians throughout the Middle East. The participants recommitted themselves to work together on similar matters in the future that are of mutual importance to the diverse Christian communities of the Bay Area that have ancestral and ecclesiastical roots in the Middle East.

ECoBA is a spontaneous grouping of pastors who serve the Eastern Churches of the Bay Area. They organized a powerful prayer for peace in Syria and the Middle-East a year ago. With the escalation of ISIS threat endangering the culturally unique and historically long standing Christian communities in the Middle-East, ECoBA feels the responsibility of bringing their concerns to public and government awareness. 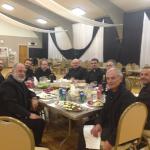