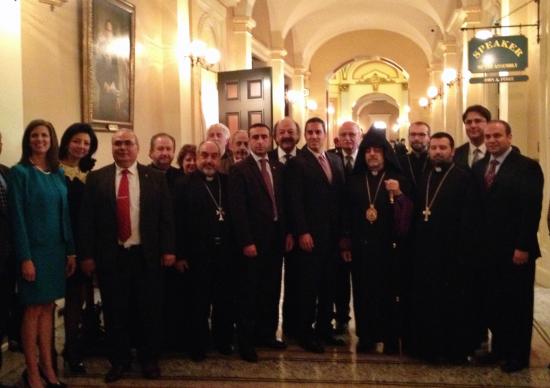 The Primate’s prayer was followed by a presentation of the Assembly Joint Resolution 2 "California week of remembrance for the Armenian Genocide of 1915-1923," which was introduced by Assemblymembers Mike Gatto (43rd district), Katcho Achadjian (35th district), and Adrin Nazarian (46th district). The clergy also met with the Assemblymember Mike Gatto who had officially invited the Primate to deliver the opening prayer.

We present to the faithful the Primate’s Opening Prayer in its entirety.

Almighty God,
As we gather to praise Your Holy name, we remember in our prayers with immense gratitude all the good tidings and divine gifts which You have bestowed upon us. We give thanks to You especially for the California State Assembly and all the dedicated and honorable members who year after year have extended the due respect to the blessed memory of the victims of the Armenian Genocide of 1915. Remembrance is an act of self education and nobility which deepens within our spirituality the respect for life.
Almighty God,
We ask Your blessings upon all members of this Assembly and the people of the United States of America to observe April 24th as a sacred day when 1.5 million Armenians were led to extermination. Our remembrance of the martyrs who gave their lives for their faith and freedom is certainly an act of prayer. Our remembrance is certainly an act of justice to their memory which sends a clear message to the leaders and nations of the world not to trample the truth but to pursue the recognition of the Genocide for what it truly is … A GENOCIDE.
Almighty God,
Enlighten the minds and the souls of all people to honor and respect the truth, for we firmly believe that the unpunished Genocide of 1915 has triggered Holocausts and Genocides of other nations, thus obliging all with the sense of responsibility for recognition.
We pray to the All Merciful God, the Creator of the Universe, to instill in the hearts of all nations the vision of peace and the power of Your divine love. We pray to the Almighty God to empower the members of the California State Assembly to be dedicated leaders in guiding the people entrusted to them with the lessons of the past, enriching the present with a deeper sense of responsibility to honor life and with the vision and the humility to lead us to a brighter tomorrow for the sake of our children. Amen.
We conclude with a verse from the Holy Bible where St. Paul the Apostle addresses to the Corinthians with the following words, “God has so composed the body, giving more abundant honor to that member which lacked, so that there may be no division in the body, but that the members may have the same care for one another. If one member suffers, all suffer together; if one member is honored, all rejoice together” (1 Corinthians 12:24-26).

Prior to taking the assembly floor, Archbishop Derderian was also informed of the tragic events which transpired at the Boston Marathon. “Our heartfelt prayers go out to the families of the victims of the explosions,” said His Eminence. “The shameful act perpetrated against innocent people disrupted the peace in the city of Boston. We call upon the Diocesan faithful to join us in fervent prayer beseeching God’s peace on Earth,” he added. 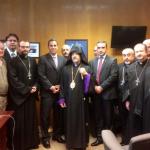 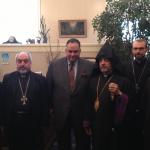 St. John Armenian Church is proud to announce its support the accomplishments of...

The Winter Shelter Volunteer Program is Back

We truly excited to announce that once again St. John will be organizing a several service dates...