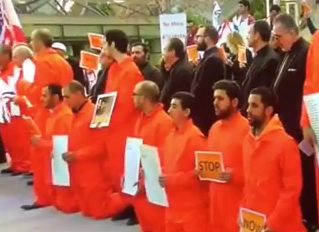 Saturday, February 28, 2015, Rev. Fr. Datev Harutyunian, Fr. Hovel Ohanian and Fr. Mesrop Ash along with Clergy from several Eastern Christian denominations, collectively referred to as the Eastern Churches of the Bay Area (ECoBA), participated in a demonstration outside the San Francisco Federal Building, to raise awareness regarding violence against Christians in Middle East. Several young men paid homage to the 21 Coptic Martyrs by wearing orange overalls who were brutally murdered by ISIS.  Also a group of Assyrians were amongst the demonstrators who wanted to show their support to the families of over 200 men, women, and children that were kidnapped by ISIS.

The Armenian Clergy collaborated in the organization of the rally, and participated by offering words of solidarity and praying the Requiem prayers of the Armenian Church. Each participating denomination offered prayers from their own tradition. Following the rally an organized marched took place from the Federal Building to the City Hall, in order to display the groups heartfelt emotions regarding violence toward Christians to the San Francisco public.

We pray that during this lent season, God guide all creation with fatherly care, and help us to look forward to a peaceful future. 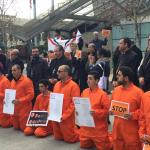 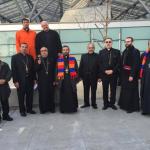